Gobustan National Park officially Gobustan Rock Art Cultural Landscape is a hill and mountain site occupying the southeast end of the Greater Caucasus mountain ridge. It is located west of the settlement of Gobustan, about 40 miles (64 km) southwest of Baku city centre on the west bank of the Caspian Sea.

In 1966, Gobustan was declared a national historical landmark of Azerbaijan in an attempt to preserve the ancient carvings, relics, mud volcanoes and gas-stones in the region. In 2007 Gobustan was declared a UNESCO World Heritage Site considered to be of “outstanding universal value” for the quality and density of its rock art engravings depicting images of hunting, fauna, flora and lifestyles in pre-historic times and for the cultural continuity between prehistoric and medieval times that the site reflects.

Gobustan Rock Art Cultural Landscape covers three areas of a plateau of rocky boulders rising out of the semi-desert of central Azerbaijan, with an outstanding collection of more than 6,000 rock engravings bearing testimony to 40,000 years of rock art. The site also features the remains of inhabited caves, settlements and burials, all reflecting an intensive human use by the inhabitants of the area during the wet period that followed the last Ice Age, from the Upper Palaeolithic to the Middle Ages. The site, which covers an area of 537 ha, is part of the larger protected Gobustan Reservation. 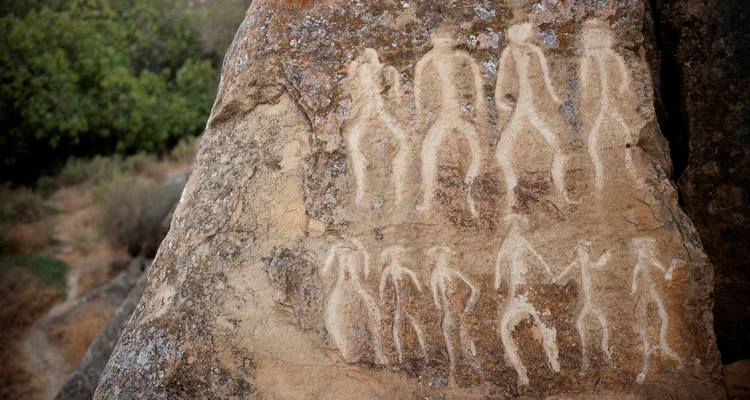 Gobustan has outstanding universal value for the quality and density of its rock art engravings, for the substantial evidence the collection of rock art images presents for hunting, fauna, flora and lifestyles in pre-historic times and for the cultural continuity between prehistoric and mediaeval times that the site reflects.

The rock engravings are an exceptional testimony to a way of life that has disappeared in the way they represent so graphically activities connected with hunting and fishing at a time when the climate and vegetation of the area were warmer and wetter than today.

The first archaeological excavations on the territory of the reserve began in the 1930s. In 1939-1940, the Azerbaijani archaeologist Isak Jafarzade discovered here about 3,500 rock paintings, drawings and signs, as well as man-made pits, holes in rocks, etc. Since 1965, a special scientific expedition has been engaged in investigating the monuments of Gobustan. Archaeological research of more than 20 dwellings and shelters, more than 40 burial mounds was carried out.

The well-known Norwegian explorer and traveller Thor Heyerdahl, who repeatedly visited Azerbaijan, after studying the Gobustan petroglyphs, came to a sensational conclusion about the kinship of Norwegians and Azerbaijanis. He discovered the similarity of the ships depicted on the rocks to the vessels used by the Vikings, and concluded that the Vikings had begun their journey westward from here.

Another attraction of Gobustan is Gavaldash - an original tambourine stone. Tapping on them with a small stone, you get various clear sounds, reminiscent of a drum, naghara. Gavaldash consists of shell limestone and is a flat piece of limestone. It produces various sounds in different places, depending on the density of the shells in the composition of the limestone. The reason for this distinction of sounds is the emptiness and porosity of the shells.

Now Gobustan is a real open-air museum. Every year this amazing art gallery is visited by thousands of people from all over the world.

Enigmatic ‘fire mountain’ in Azerbaijan Azerbaijan, a country with ancient and rich history located on the crossroads of the East and Wes...
Read more