Azerbaijan, a country with ancient and rich history located on the crossroads of the East and West and often called the Land of Fire, is attractive for tourists due to its unique places, resources and traditions.

Yanar Dag or the Fire Mountain is one of the magically attractive sites, which surprises and enchants visitors. It seems like a brilliant sparkling on the mountain surface.

People have always regarded the magnificent view of Yanar Dag as something "sacred".

Yanar Dag, situated on the Absheron Peninsula some 25 kilometers northeast of the capital city Baku, is also known as Pilpila, Bozdag, Ahtarma and Gynarja. It is a 116-meter hill with a continuous natural gas fire eruption, which jets out into the air three meters high from a porous sandstone layer.

Unlike mud volcanoes, which are widespread in Azerbaijan, there is no seepage of mud or liquid at Yanar Dag and its flame burns steadily. A 10-meter wall of fire creates the most spectacular view at night. Around this open fireplace, the air is always heavy with the smell of gas.

The constant Absheron wind makes this place even more mysterious, by creating a bizarre form of fire flames.

Tongues of fire also rise from the surface of streams located near the hill. Thus, these streams are called Yanar Bulaq, which is translated from Azerbaijani as "a burning spring".

The Yanar Bulaq springs are harmless at first sight. However, they may be ignited with just a lit match. The springs' water is saturated with sulfur. The locals believe in curative properties of the springs and spend hours taking footbaths there.

Some 200 meters away from the mountain, a weak active volcano, called Gotur Bulaq or Itchy Spring, excretes a mud and sulfur water mix, which is also believed to be curative, especially for people with skin diseases.

The history of Yanar Dag is shrouded in mystery, but a local legend goes that a shepherd once accidentally lit a fire there and the hill has been burning ever since.

There is a cave on the top of the mountain, called "Wolve's Gates". According to another local legend, a pack of wolves lived there, but the inscription on the cave's wall shows that those "wolves" were sensible beings. Scholars believe that those inscriptions may refer to a primitive man habitat.

The fire on Yanar Dag burns notwithstanding weather conditions, so, local residents regard the burning mountain as a holy place and the mountain became a place of pilgrimage for Azerbaijani population, as well as foreigners, mostly from India and Iran.

"A lot of sick people see the mountain in their dreams," a local man has said, "and when they come here, they receive treatment. On the other hand, the health condition of those who came here drunk deteriorates."

Nowadays, Yanar Dag is a historical preserve and is under state protection; archeological studies are being conducted in the area. The Institute of Archeology and Ethnography of the Azerbaijan National Academy of Sciences has recently discovered two burial hills there.

As is known, Azerbaijan possesses enormous oil and gas reserves. The surface flames because of steady gas emissions from underlying soils. Only a handful of fire mountains exist in the world today, and most of them are located in Azerbaijan. However, when exploitation of these reserves began, most of the natural fires burned out due to the reduction of underground pressure.

Natural gas flames still amaze people nowadays, which makes quite understandable the fire's influence on the people throughout history. The natural fires of Azerbaijan are considered to have played a crucial part in the creation of a mystical faith centered on ceremonial fire cults - Zoroastrianism, which appeared in the region around 2,000 years ago.

A number of historical records signify numerous flames around the Absheron Peninsula, which encompasses the capital Baku and its surrounding regions, in the 13th century. Venetian merchant traveler Marco Polo visiting Baku mentioned numerous flames all over the Absheron Peninsula. Five centuries thereafter, famous French writer Alexandre Dumas also witnessed natural flames in a mysterious Zoroastrian fire temple. He wrote, "This is absolutely the most interesting and fascinating thing, which can be seen nowhere else." 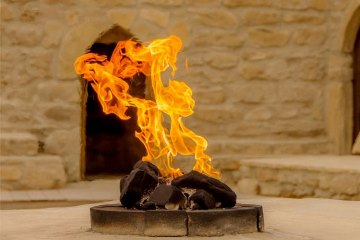 One of the most interesting and peculiar historical monuments near Baku is the fire temple of Indian fire-worshippers, called Ateshgah. It is located...
Read more