Experience the culture and nature of the “Land of Fire” by visiting the Old City of Baku. The most popular places such as Mud Volcanoes, Fire Temple and more will be visited. Real Caucasian traditions and gastronomy will make You remember this trip forever.

Tour to Old City Baku and around: The ideal introduction to Baku, this action-packed tour takes you to the many of Azerbaijan’s most fascinating locations in Baku centrum. Explore the centuries-old historic walled center, Shirvanshah’s Palace, Maiden Tower, marvel at a city-wide panorama from Highland Park, and get a peek at tiny manuscripts at the Miniature Books Museum.

Cover the highlights of Baku on this after-hours evening tour, which shows you the glittering lights of the city after dark. Explore a mix of old and new, getting an in-depth introduction to both modern and traditional sides of the city. Highlights include a look at Flame Towers all lit-up, and a visit to seaside-facing Flag Square, one of the tallest flagpoles in the world.

Discover all that Baku and its surroundings have to offer on this full-day tour. See the prehistoric petroglyphs at Gobustan National Park, learn about the mud volcanoes and their healing properties, visit the Zoroastrian fire temple of Ateshgah, explore the fire mountain of Yanardag, and admire the architecture of Baku's modern city center. This tour includes a tour guide and transportation to all of the sights from your hotel.

Azerbaijan’s top provincial holiday centre, Gabala is a string of flashy new hotels and a burgeoning ski resort spread up into the foothills of some glorious forested mountains.

Khinalug (Khinaliq, Xinaliq) is the highest, most remote and isolated village in Azerbaijan and among the highest in the Caucasus (elevation of 2,335 m) and amongst the oldest continuously inhabited places in the world. It is considered as one of country’s premiere destination with beautiful landscape and interesting village. Khinalug ceased to be isolated from the world, although still remaining a unique place. In the year 2007, Khinalug village was declared a state historical-architectural and ethnographic reserve of Azerbaijan by UNESCO.

Check-out from the hotel. Pickup from hotel, and transfer to Heydar Aliyev airport (GYD).

(Prices are mentioned for per person, in USD currency)

With accommodation at Consul Hotel 3*

For a full refund, cancel at least 48 hours in advance of the start date of the experience. 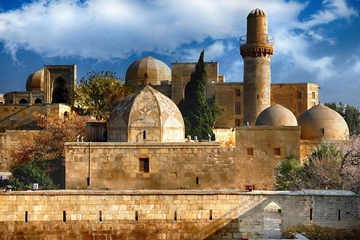 On internet You can find many posts about the most interesting facts about Baku, but here we chose the ones that TES team thinks are the most...
Читать дальше

Enigmatic ‘fire mountain’ in Azerbaijan Azerbaijan, a country with ancient and rich history located on the crossroads of the East and Wes...
Читать дальше